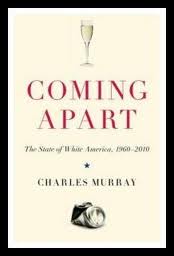 In my attempt to avoid the very kind of balkanized information gathering I regularly post about, I followed closely the various news stories about Charles Murray's recent book, Coming Apart: The State of White America 1960-2010. I wasn't a fan of Murray's earlier work, but this seemed to speak to issues related to the 1% and 99% in ways that were worth tracking.

Since I'd be doing some solo driving during my recent spring break, I downloaded the book from I-tunes. The main advantage to listening to the book is that you can talk back (hopefully with not too many others listening). The downsides are that you can't look up particular passages and that the narrator mispronounces certain sociological words (mores in sociology is pronounced like Morays not S'mores). But I decided it would be good for me to listen. And it was until I got really angry and had to quit about 3/4 of the way through the 12 hour audiobook.

First, Murray posits a cohesive society on the eve of JFK's assassination. He's speaking nostalgically about his own 20s (he was born in 1943) and I could forgive some rose-colored glasses (he ignores the cold war and much of the civil rights movement). Next, he explores the world of Belmont -- a town made up of the 5% of Americans he claims make up "the broad elite". These folks have wealthy lifestyles, work in knowledge/opinion/finance kinds of jobs, went to elite schools, live in McMansions surrounded by other folks with McMansions, have relatively high IQs, and have children with higher IQs (Murray's been making too much of IQ since The Bell Curve). He paints this picture by combining census data with anecdotes about conspicuous consumption. It's no different than scores of similar sociological pieces that show the sorting impacts of college, neighborhood, and occupation. His conclusion is that these opinion shapers changed the culture (beginning, for some reason, with the television show thirtysomething). Furthermore, these folks are isolated from the rest of America in terms of values, politics, and culture.

The next part of the book shifts from Belmont to Fishtown, where the poor live. He begins this section by talking about how the Founding Fathers placed importance on certain values: Family, Religion, Honesty, and Ingenuity. He then suggests that the residents of Fishtown have abandoned these critically American values. He notes that Workers Disability claims have gone way up, which is a sign that people would rather take money from others than work. He talks about the breakdown of the family and how out of wedlock births and divorce rates are higher in Fishtown than in Belmont. He sees a decline in religious attendance among his Fishtown residents. And our attempts to placate Fishtown residents with social support networks have been counterproductive (about six hours in, Murray makes clear that he operates from a libertarian framework -- might have been good to start with that).

As I said, I got mad and had to quit. But it took me until this week to figure out what made me so upset. In prepping for my stratification class, it finally came clear. Murray's argument about the rich Belmont residents is entirely correlational. These neighborhoods show such and such patterns, and residents have different lifestyles. But the argument about poor Belmont residents is entirely characterological. In other words, they lack the basic values that Americans take for granted. Their cultural expressions are different from what was originally intended.

Murray has written about what his preliminary solutions would be here. In fact, I've never seen anybody write as many editorial responses to others who commented on his book (he's been running about one every couple of weeks since the book came out).

Here's where Murray goes wrong and how it relates to our entire conversation about inequality in America. He bases his argument about the poor in terms of what's wrong with them -- the deficiencies in their values and behaviors. He bases his arguments about the rich in terms of advantages in social network opportunities. If one is to argue that Fishtown residents turned from values of honesty, family, religion, and industriousness then it makes sense to argue that the Belmont folks got that way by embracing those same values. But that's not the case. Conversely, if Belmont residents can leverage their networks toward cultural cohesion then Fishtown folks simply lack social capital.

Murray's mistake plays out again and again in our political discourse. The rich are morally pristine and should be trusted to pursue business opportunities which will benefit us all. The poor are seen as freeloading (called "takers") with critics wondering why they don't pay federal taxes (it's because they don't make enough and are disproportionate retired). This is bad sociology and worse theology. The real problem with inequality in America is not cultural first but structural first.

We just played my modified monopoly game in the Intro to Sociology class. For 30 years it has shown that the structural differences built into the game create certain cultural responses. This is true regardless of the intentions, values, or IQ scores of the players. Libertarians bemoan using the tax code to "pick winners and losers" but we seem quite comfortable picking winners and losers when it comes those who live in Belmont and Fishtown.
Posted by John Hawthorne at 10:22 AM